I feel I did this novel a disservice when I started reading it.  Having finished my previous book, I dived straight into Kate Mosse’s latest without really pausing for breath.  This resulted in my first impressions of The Taxidermist’s … END_OF_DOCUMENT_TOKEN_TO_BE_REPLACED

I haven’t managed to blog very much at all recently. I’m still in the process of wading through my MA essay on Byron – I was even writing it on Boxing Day when everyone else was watching trashy TV and eating chocolate. I still ate the chocolate of course…

Anyway, I have had assistance in the form of the gorgeous William Blake who keeps popping to the side of the tank to see what I’m up to. I think he likes the picture of Byron on the cover of my book to be honest. Probably sizing him up to see if he could take him in a fight.

I know William Blake has quite a few fans out there, so here’s some recent pictures of him eating his breakfast and swimming round the new plants Santa Fish brought him for Christmas. 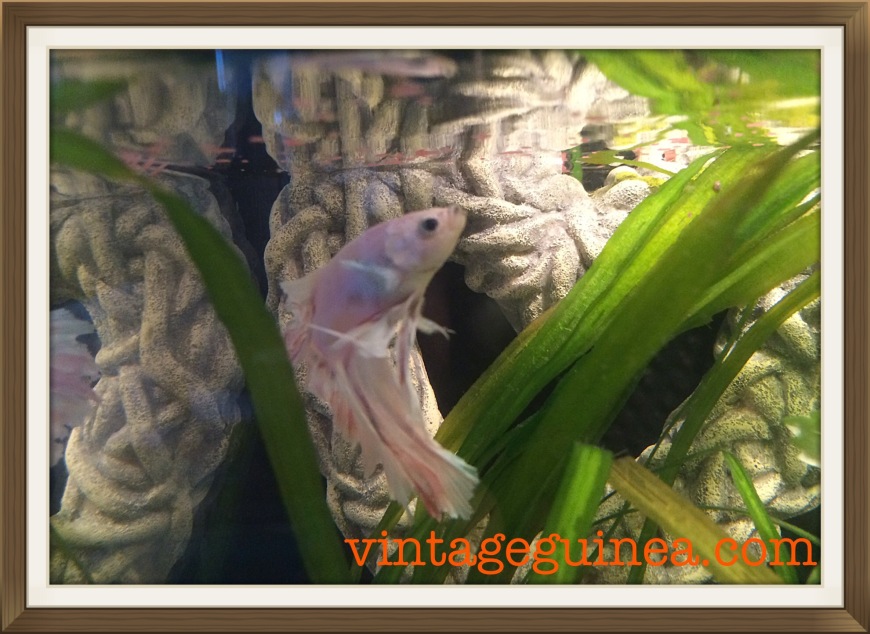 I picked this book up from library a couple of weeks ago as I was utterly intrigued by the title.  The premise behind the novel is just as compelling…

The main character Nick Donohue, an obituary writer for The Times, survives a horrific train crash with a barely a scratch on him whilst his fellow passengers are killed or maimed.

Whilst others may regard him as incredibly lucky to be physically unscathed, Nick ultimately has been devastatingly affected by the crash.  He begins to suffer from vivid nightmares in which he apparently predicts the deaths of a number of individuals.  Afraid to sleep, he finds himself increasingly distanced from his former life and colleagues and eventually, he is convinced to leave the urban sprawl of London for a Cornish village.

The narrative is beautifully crafted and avoids the clichés typically associated with the genre.  The ending contains a satisfying twist that is at once poignant and in retrospect, somewhat inevitable.  For me, the inclusion of animals was particularly satisfying – Oliver the cat and Marillion the nervy ex-racehorse are as much the stars of the piece as Nick and Sasha.  I also found the tentative friendship between Nick and another train crash survivor, Matthew Levin, an effective addition, which showcased the depths of Nick’s compassion and offered both men a chance to heal.

This novel would work really well for book groups and with that in mind, the following questions could be used as discussion points:

Of course, if anyone would like to discuss the book with me on the blog as a kind of on-line book group, I’d be more than happy to do so.  I’ve included the link to Lauren St John’s website here, so you can have a look at her bio and other work.  She has written a number of books for children and The Obituary Writer is her first novel written for adults.  I very much look forward to her next!

I got to thinking today about the notion of communities and community spirit.  As a fairly new member of the blogging community I am pleasantly surprised by how friendly and kind other bloggers have been.  I’m also happy to say that, through reading the work of other bloggers, I have learnt an awful lot of new stuff!

The things I write about on my blog are somewhat diverse but they are what makes me, well me!  Being part of this online community has enabled me to get an insight into the unique and wonderful worlds of others with similar interests to myself.  I live in quite a small town so the likelihood of me bumping into a guinea pig obsessed, vintage wearing individual with their nose buried in classic literature is pretty thin to say the least.  In contrast, I can type in the words ‘vintage’, ‘literature’ or ‘guinea pig’ and immediately be offered a plethora of potential writers to connect with.

The act of committing your thoughts, feelings and ideas into writing is a cathartic process and one that humans have been doing for hundreds of years.  How lucky are we that we can do that and then share those thoughts with others around the world with just a few key strokes?  It always makes me smile when I see that people in other countries have read my blog – it’s wonderful that people on the other side of the world to me are interested in what I have to say.  We really are part of a community and even though it’s an online one, surely it’s just as important as the traditional kind?

This is the first book I have read by Daisy Goodwin and, as I was looking for a light read in between my MA literature, I wasn’t disappointed.  The plot hinges around the love triangle between three characters: Sisi, the Empress of Austria; Bay Middleton, a dashing officer and rider in the Grand National; and Charlotte, a rather unconventional young woman with a passion for photography.

Goodwin’s writing style is easy to follow and her characters are plausible, although some (such as Fred and Chicken) verge on the stereotypical and appear to be played for laughs.  In this regard, I feel that the novel would transition well to an enjoyable Sunday evening period drama on the TV.

After reading the novel, it was interesting to do a little research into the key characters, as they are based on real life historical figures.  There are some beautiful images of Sisi on the web and it is easy to see why she captured the imagination and romanticism of so many in her day.  I’d certainly recommend the novel if you are a lover of historical romance however, it’s perhaps not for you if you like a more tautly written portrayal of the grittier side of Victorian life.

Hello! It’s very exciting finally getting round to starting this blog.  It’s been something I’ve been meaning to/wanting to do for ages, but essay writing and general life have got in the way somewhat.  However, with my birthday literally around … END_OF_DOCUMENT_TOKEN_TO_BE_REPLACED